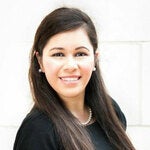 Christina Maturino is an immigration paralegal at Badmus & Associates. She graduated from Southern Methodist University in 2013 with a Bachelor of Arts Degree in Sociology and Spanish. Her legal career began with a successful summer internship in 2008 at a mid-sized law firm in Dallas, Texas. While completing her studies at SMU, Christina worked with this law firm as a part-time file clerk and then as an assistant to the immigration department. She was promoted to an immigration paralegal in September of 2014.

Since then, Christina has worked closely with attorney Ann M. Badmus as an immigration paralegal. She is responsible for the preparation of various waiver applications (national interest and hardship), adjustment of status (family and employment based) and immigrant petitions. As the daughter of an immigrant mother, Christina is honored to assist clients in fulfilling their dreams of working in and immigrating to the United States.

We’re on your side. Contact us for legal support and guidance.

Thank you for contacting us. We will get back to you shortly.

Please complete all required fields below.