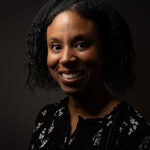 Tanille Royston  is an associate attorney at Badmus & Associates. Her practice consists of family, employment, and business-related immigration matters, representing employers and their employees before the United States Citizenship and Immigration Services, Department of Labor, Department of State, and various state and federal agencies with immigration oversight. She also helps clients with business law matters.

One of the highlights of Attorney Tanille Royston's career was when she was appointed as the Magistrate of the 68th District Court in Flint, Michigan from 2007 to 2008. As a Magistrate, she presided over municipal pre-hearing conferences and small claims cases. She was one of the youngest people to serve on the bench in the state.

Attorney Tanille Royston attended the University of Michigan and Wayne State University Law School. She is licensed to practice law in Texas, Illinois and Michigan. She also received her Professional in Human Resources Certificate in 2012.